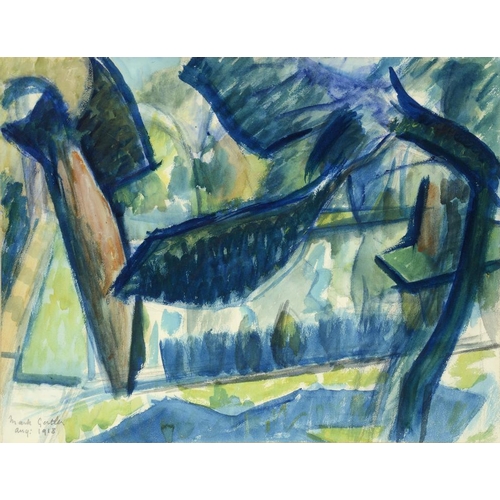 Provenance: Dr I Cross, thence by descent to the present vendor.

Exhibited: Leicester Galleries, London, Memorial Exhibition of Works by the late Mark Gertler May 1941, where acquired by Dr I Cross.

This remarkably fresh watercolour, which has not been exhibited since its inclusion in the 1941 Gertler Memorial Exhibition at the Leicester Galleries, is a major rediscovery of one of the very few fully accomplished works in the medium by Mark Gertler.

It shares its title with an oil of 1916 (private collection) and is one of several compositios, the subject of which, the Italianate Garden of Garsington Manor and, especially its statue fringed pond with a notable Irish yew tree standing sentinel, are recurring themes in Gertler's painting of the period. From 1915, the Tudor manor house in Oxfordshire was the home of Lady Ottoline Morrell and her husband. Until they left in 1928 it was a sanctuary for an illustrious circle of artists and pacifists such as Bertrand Russell and D H Lawrence and his German-born wife Frieda.

Central to life at Garsington was Gertler, for whom his new found home from home was a source of at least partial fulfilment and happiness. Artistically too, the praise and influence of, for example, D H Lawrence was important. He was a constant guest staying for most of the summer months over several years. According to Ottoline Morrell's daughter he was "a son of the house."

The present watercolour dates from August 1918, after the country had been at war for four years and not long after Gertler had completed his masterpiece, The Merry-Go-Round, a work unrivalled before or since as a testament against what Gertler called the "butchery" of war.

That he much preferred life in the country, working on the farm (for at least some of the time) when not painting, to living in "sordid" London is not in doubt. Nor was his reaction to the outbreak of war, wistfully remarking to Dora Carrington "The best thing we can do is to paint." In the garden at Garsington, in its summer glory he transcends his loathing of the war and painful artistic and personal travails. The Pond Garsington is, at one level a post-impressionist evocation of England but, at one much deeper it is the work of the mind of an outsider, indelibly and profoundly affected by not only the bloodbath in Europe but the hysteria, intolerance and futility of it all.

In superb condition with on the backboards the labels of the Leicester Galleries, not hitherto offered for sale, the presence of Christie's stencil numbers and labels on the backboard not with standing. The watercolour was consigned, we understand, not offered at auction 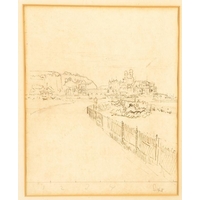 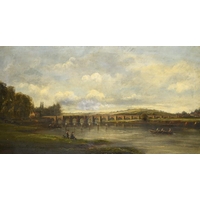