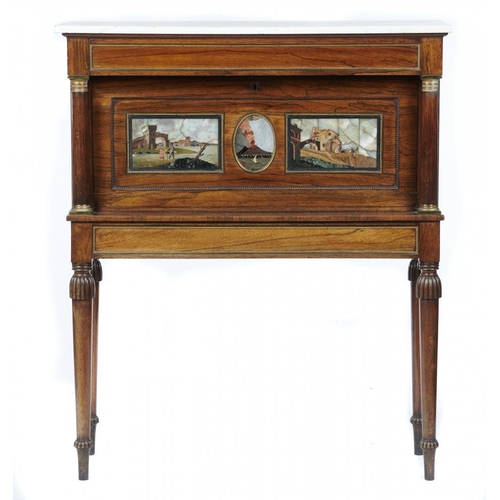 Provenance: In the same private family ownership since the early 20th c.

Florentine pietre dure panels of landscapes with ruins of this type were a speciality of the Galleria degli Lavori later known as the Opificio delle Pietre Dure and reflects the taste of the Grand Duke of Tuscany, Cosimo II (r. 1609.20). Its founder, Cosimo's father Grand Duke Ferdinando I de Medici (1549-1609) sought to emulate landscape paintings by the newly perfected art of pietre dure.

Similar examples of the use of pietre dure are found on 17th-19th c case furniture and caskets but also framed or unmounted panels such as in the Florentine room of the Schloss Favorite near Baden Baden and others still in the Museo dell'Opificio in Florence.

The two on the present beautifully preserved Regency cabinet are identical to two of those on the magnificent Wingfield Castle Cabinet now in the Gilbert Collection, London. Of ebonised and giltwood, it was made in England, 1775-99 to display a series of eleven panels all similarly featuring classical ruins, the monumentality emphasised by the presence of peasants in the foreground. See Massinelli (A M), The Gilbert Collection, Hardstones, London 2000, Catalogue No 6, pp 44-46 and Minter (A), Pietre Dure-A Palette made of Hardstones, article in Furniture History Society Newsletter 215, August 2019, pp 1-7, fig 5. 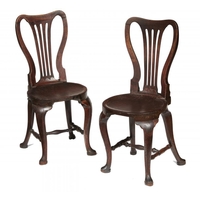 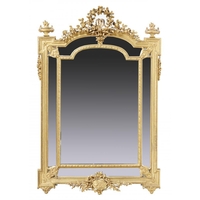