CRAWFURD, GEORGEA GENEALOGICAL HISTORY OF THE ROYAL AND ILLU... 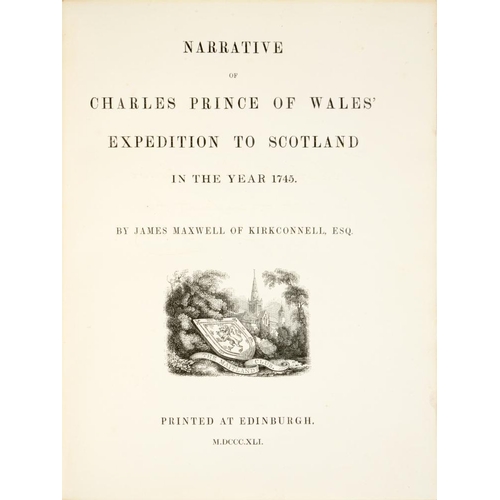 Edinburgh, James Watson, 1710. First Edition, folio, two parts in one, lacking the final 'alphabetical index' leaf otherwise complete, full contemporary blind-panelled calf, re-backed. The copy of Colonel John Ferrier Hamilton of Cairnhill, Scotland, with his bookplate and signature. There are also early 18th century unidentified signatures of a member of the Stewart family; CRAWFURD, GEORGE - THE LIVES AND CHARACTERS OF THE OFFICERS OF THE CROWN AND OF THE STATE IN SCOTLAND: from the Beginning of the Reign of King David I. to the Union of the Two Kingdoms. Edinburgh, Robert Fleming, 1726. First edition, folio, full contemporary blind-panelled calf, rubbed, wear to extremities, some internal damp-staining to top margin. The title states this is 'Vol I', however, a second volume was never written nor published, the author having decided against this, which he acknowledges at the end of the Preface. Complete; [JACOBITE INTEREST] - A NARRATIVE OF CHARLES PRINCE OF WALES' EXPEDITION TO SCOTLAND IN THE YEAR 1745 By James Maxwell of Kirkconnnell. Edinburgh, [The Maitland Club], 1841. First edition thus, small 4to, a fine copy, later quarter calf with marbled boards. Contemporary presentation inscription from Alexander Macdonald, a member of the Maitland Club, to Charles K[irkpatrick] Sharpe, the Scottish antiquary and artist. The Maitland Club was a Scottish historical and literary society, founded in 1828 to edit and publish early Scottish texts. Since the distribution of publications was usually limited to members, a typical print run consisted of between 70 and 100 copies - so this example is now rare (3) 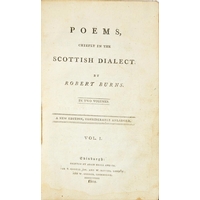 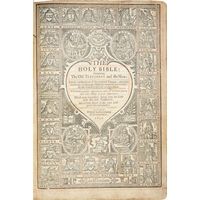