A FINE ENGLISH EMBROIDERED MINIATURE OF CHARLES I, LONDON, C... 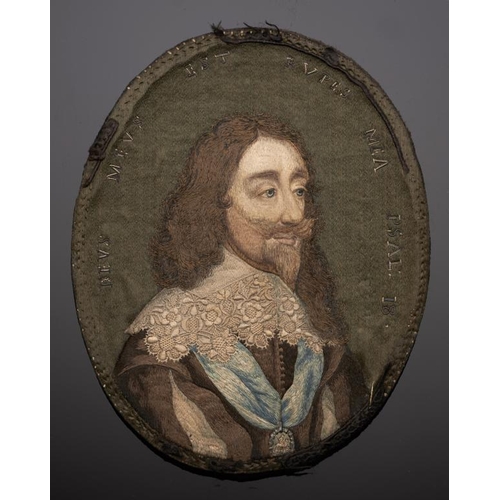 This spectacular example of English Restoration needlework of the highest quality is one of small group of portraits of the king by the same unknown professional hand. All are closely based on Hollar's well known engraving of Charles I wearing the ribbon of the Order of the Garter. Such is the fidelity with which the portrait is rendered that it justifies the description of a 'cabinet miniature', one intended for display in a cabinet or on a table.

The quotation from Psalm 18 (v 2-3) is King David's invoking God's protection from his enemies. An identical example is in the Metropolitan Museum, New York. It was acquired from Percival D Griffiths in 1938. Two are in the Victoria & Albert Museum and another is in the Wallace Collection, London.

Nevinson (see below) considers this select group, of which the present example is hitherto unrecorded, date from the first few years of the reign of Charles II. As such they represent some of the earliest evidence of the cult of the 'Martyr King'. In several respects they relate to the miniatures incorporated as centrepieces in embroidered bindings, such as that on a copy of the Eikon Basilike (1649) although none of these can be dated with certainty to the Commonwealth. Nor is there a particular reason to link them to the Broderers Company and although metal thread and purl wire is seen on some bindings of the period, as it is hard on the hands and the professional embroideress, whether working in her small workshop or domestically, would have certainly used silk in preference, or wool for tent stitch on canvas, with metal braid reserved for borders or edges, as here.

The embroidered portraits of Charles I at his trial (in a hat) are technically different featuring brick stitch, for example on the King's cloak. They date from later in the 17th century. See Nevinson (J L) The Embroidered Miniature Portraits of Charles I, 'Apollo', October 1965, pp 310-313. 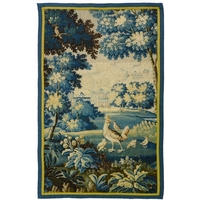 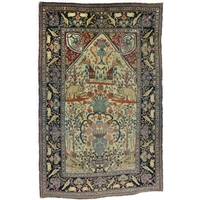