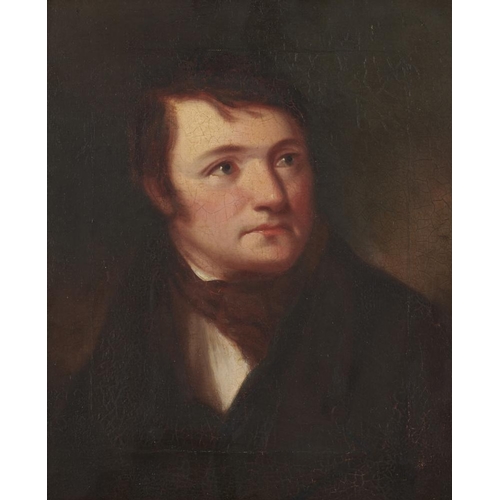 John Nicholson the Poet of the West Riding was born near Harewood, Yorkshire. Educated privately, he was engaged as a wool sorter in his father's factory, which was to remain his lifelong occupation interrupted by periods of 'dissipation' (DNB) and his writing.H work first appeared in print in 1821, but his poetic ability was recognised four years later with the appearance of Airedale in Ancient Times. Although ill educated some of his shorter compositions are not without originality and even grace (DNB).

The Belfast born artist John Hunter Thompson was a sociable and popular member of the thriving Bradford artistic milieu of painters writers and poets that included Branwell Bronte, whose 'salon' and place of annual re-union was The George Hotel, a coaching inN run by the hospitable Margaret Reaney (1815-1893). The present portrait of John Nicholson may be the one mentioned by Butler Wood in 'Some Old Bradford Artists (the Bradford Antiquary 1895, pp 208-209). A friend and contemporary of both men and Branwell Bronte in his ultimately futile attempt to pursue a career as an artist, was the Bradford born portrait painter and early photographer William Overend Geller (1804-1882) who, although spending much of his career in London, maintained strong local connections. It is his portrait of the by then renowned Airedale Poet, similar in composition to the present small scale head and shoulders, by which Nicholson's appearance is known to posterity. 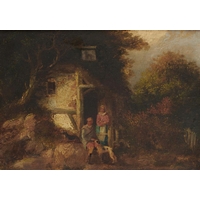 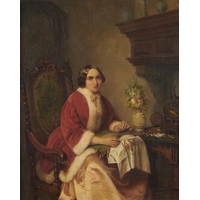